Transporting the Tay Whale – One Year On: Lee Simmons shares his views

In October 2021, Malin Abram, the specialist heavy lift arm of the Malin Group, transported the Tay Whale, an elaborate 22 tonne stainless steel sculpture 500 miles along the east coast of the United Kingdom from its build site in Littlehampton to  the V&A Museum in the city of Dundee.

The move was executed by a team of Malin Abram engineers and other stakeholders, and required careful management of the environmental factors, namely, tight tidal windows in the narrow River Arun at Littlehampton, and alongside the V&A in the fast-flowing River Tay. 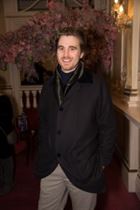 The four-day transit along the coast, was accompanied by good sailing conditions, which allowed for dramatic views, reminiscent of its 19th century namesake, as the whale made its way to its new home along the River Tay. Upon barge arrival in Dundee, a complex 3-beam lifting arrangement in combination with a 700te capacity crane was used to successfully lift the whale from the 50m barge aboard which it had safely transported, it to its final, proud position on the Dundee Waterfront.

“I drove the idea that we should transport the Tay Whale by sea rather than road, rail, or air from the get-go.

It seemed an obvious, and rather poetic way to take the whale home. And knowing little of the technical detailing involved, I had naively assumed it would be a fairly simple process as long as we could get a vessel big enough to carry a 35-meter-long structure.

Of course, there were other benefits to moving the whale in one piece as there is a simplicity in building a sculpture like this in one setting and dropping it in situ. This was an important, high value piece of public art and I wanted to make it in its entirety rather than build it in small sections or carve the finished piece to bits and haul it up the road in different trucks to stick it back together at the other end. Moving a single piece is quicker, costs less, offers more control, and ensures the quality of the sculpture.

So the barge was always my preference and myself and Littlehampton Welding set about looking for a vessel big enough to do the job.

What I had not considered were the 101 moving parts in amongst all that!

We looked at various options. Some companies had the kit but not the ability to piece everything together, some companies could do parts of the job but not others, some lacked the vision or the transparency to help us understand everything that would be involved up front.

What I liked about Malin was that they offered an end-to-end solution. They had the kit, they had the experience, they had the expertise – and they were open from the start about the breakdown of costs and charges, including elements like the required insurance and surveys as well as basic transportation costs. Early engagement with them really was key to the success of the whole project and I’m grateful to their Commercial Director Chris Cairns in particular for his generosity in the time and expertise required to make it a success.

Malin helped us understand issues around feasibility and finance. They had vision and they were un-fazed by a very quick timetable, so when others said “no you can’t”, they often said “yes, you can – and here is how”.

I also had confidence in their ability to deal with the various complexities involved in the project.

Alongside our very tight deadline, we needed to get buy in from various Harbor Masters, Port Authorities, and contractors.

We started at a point where the Harbor Master at Dundee required a great deal of bathymetric information including a survey of the riverbed to understand water depths relative to the tidal swim, but Malin took all this in their stride. I liked their open minded, sensible approach, which was grounded in logic yet open to ideas. They never said ‘no’ for no’s sake.

They took responsibility for the whole piece and were good at advising us that the Harbor Master, Port Authority or whoever wants this information, but we also need a sound methodology on these different elements too.” 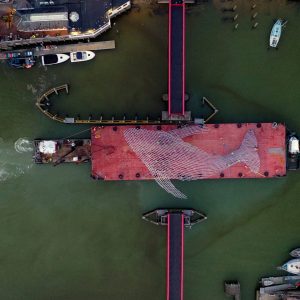 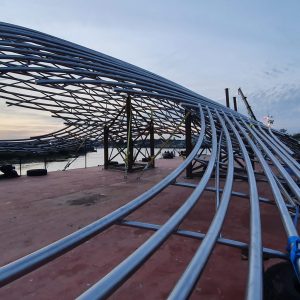 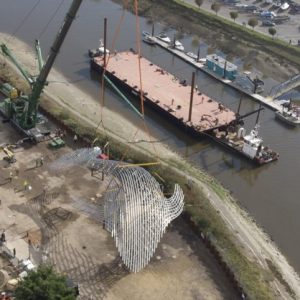 “Overall, their expertise shone through. The detailing around how the sculpture would connect to the barge for example, or how it would release was invaluable, and it was good to see how they thought innovatively about other elements such as not having physical connections to the quayside but using another support vessel.

In Littlehampton, their advice about how we’d get a 36 meter long by 18.6 meter wide whale through the narrow span of a 20.8m meter footbridge was invaluable, while in Dundee, we needed very clear agreement on how to get in and out of the site. We had half an hour to play with so minute by minute detail of where boats needed to be was paramount to success.

When the day came, I found it surreal and deeply poetic to see a sculpture of that size being picked up in its entirety and set on a barge to float home.

I chartered a helicopter to follow parts of the journey and was able to fly fairly close at times. Seeing the Whale in isolation surrounded by such an expanse of water was pretty phenomenal. I felt it must be a similar experience to seeing a real humpbacked whale in its environment and I found that very humbling.

We had not wanted to give too much away about the details of the journey before the Whale arrived in Dundee, but of course people worked out how to track it on marine traffic apps and were able to guess where it would be and when it would arrive. In the end, I liked the fact that people really engaged with the journey on social media. There was something quite special about that and it was right that the Whale had a welcome.

I had worked on this project during lockdown and through the pandemic, so I think it was uplifting not just for me but for the people who witnessed it to see the Whale arrive by sea just as things were returning to normal. For me, it marked a special moment – a return to the extraordinary things that can be seen in ordinary times.

The journey has become part of the piece, the story of the piece and the history of the piece. It adds a new dimension to the narrative to know that the Whale was picked up, placed on a barge and applauded along the pier by over 1000 well-wishers at Littlehampton and that it travelled gracefully on that barge up the coast of the United Kingdom for three and a half days before being welcomed home by a different gathering of people in Dundee.

Seeing the connection of the crane and the lifting off in Dundee was also a big moment. It moved gracefully and looked so perfectly simple and effortless, it was hard to grasp how much time, effort and planning had gone in to making it a success.

The move was a great example of positive collaboration with everyone having an important role to play. For me, collaboration is always about learning and I began the process with very little knowledge of marine logistics but Malin were so giving of their time and expertise there were lots of opportunities to learn, which was a benefit.

My advice to anyone beginning a similar project is to be open to every possibility. Sometimes it is human nature to say: “It’s too difficult, it can’t be done”. We certainly had that experience at times, but time and again the team at Malin stepped in and said: “It can, we will, here is how”. If you are tenacious enough and you are willing to take on the harder tasks alongside the easy ones, you can do much more than you think.”